After the Babel Towers attack, lo-fi operators worked the edges of the language, forging new phrases from the fragments of literature. They filled boxes with word shards in the hope of recreating lost stories.

The Literary Operator is a collaboration between Tom Armitage and Jeff Noon. Commissioned by Lighthouse for Brighton Digital Festival, the work interprets and remixes Spore #50 - one of Noon's microscopic short stories, known as Spores. The work manifests a fictional device - a "lo-fi, literary operator" - as an entirely functional object.

The puck attached to the Operator is passed over the source book's spine, and the device attempts to generate new prose from the language within that book. A few seconds later, a printer on the front of the machine spools out a new passage generated from the source text. This may or may not be what the Operator's user hoped for, depending on how much damage the book received during the Babel Towers explosion. Almost always, the text has been mutated in some way.

Our device resembles a traditional portable Operator in most regards, although its battery pack is no longer functional, so it now runs on mains power. Unfortunately, not all text is viable for processing; during extensive tests the machine has functioned correctly with only a tiny fraction of novels, plays and poetry books. However, we hope this small selection will give users a sense of the Operator's range and taste. 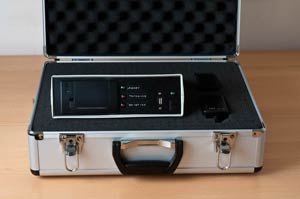 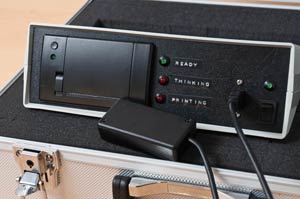 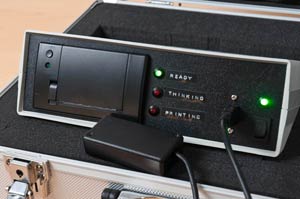 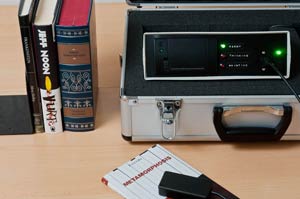 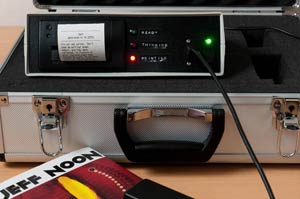 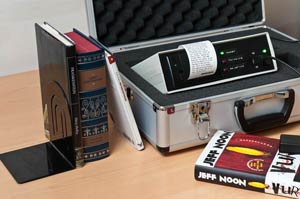 In the aftermath of the attack on the Babel Towers, language was destroyed or at best fragmented. Books and electronic files were rendered useless, empty of narrative. A few word shards remained here and there, scattered among the debris. Our ancestors built devices to find these intact phrases. We can imagine them wandering at dusk across the desolation of Word Zero, waiting for the telltale glow of the light which indicated that a viable text had been found. However, the explosion infected language at the deepest level and meaning itself had been pulled apart and reformed into new shapes.

Despite these difficulties, the lo-fi operators collected their favourite fragments and slowly pieced them together to make up sentences, and later on, paragraphs. It was painstaking work. They were often of a lowly status, these collectors, designated as scavengers. And yet, slowly, over the decades that followed, whole stories started to emerge once more from the memories of those smoking ruins. Nothing can ever be the same, of course, and the post Babel literature was very different from the one that prevailed before the attacks. One fact remains: that we can speak or write at all today is down to those long-ago pioneers with their lowly, home-made devices.

Tom Armitage (email) is a technologist and designer based in London. He makes tools, toys, and art out of hardware, software, and the network. He has worked on everything from a large-scale website to aggregate UK schools data to giant, multi-part games that span a Parisian art gallery; from bridges that talk on Twitter and cities that speak over SMS to laser-cut sculptures of actors' movement. He runs a personal weblog at infovore.org.

Jeff Noon was born in Manchester in 1957. He trained in the visual arts and drama and was active on the post-punk music scene before becoming a playwright. His play Woundings won a Mobil prize and was performed at the Royal Exchange Theatre in Manchester. His novels include Vurt (Arthur C. Clarke Award winner), Pollen, Automated Alice, Needle in the Groove and Falling Out Of Cars, and a collection of 50 avant-pulp stories called Pixel Juice. He also writes microfictional 'spores' via @jeffnoon on twitter. His latest novel Channel SK1N is an experiment in independent digital publishing. He lives in Brighton, on the south coast of England. More information about his work can be found at www.metamorphiction.com.

Throughout his career, Jeff has explored various ways of remixing text, most notably in the experimental book Cobralingus. Some of the thoughts and techniques behind his concept of 'Dub Fiction' and the remixing process are described in the article The Ghost on the B-side.

The Literary Operator by Tom Armitage and Jeff Noon is commissioned by Lighthouse as part of Brighton Digital Festival.

For more information, further enquiries about exhibiting the project, and for high-resolution photographs suitable for print, do get in touch.